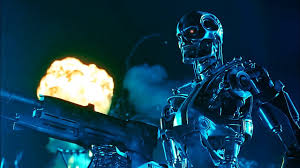 Dark Fate: Not as bad as I was led to believe

Not the best Terminator movie, but not the worst, and putting together a review of the franchise really reminds you of the dizzying highs and awful lows we've experienced.

5 Responses to Dark Fate: Not as bad as I was led to believe

I don't know, Terminator Dark Fate actively contradicts everything Terminator 2 established and then some. I have been studying the Terminator movies ever since I bought the latest movies.

Terminator 1 and 2, the reason why they are so good is that they complete each other. Terminator 2 wraps up all the plot points of both The Terminator and Terminator 2: Judgement Day.

Terminator Sarah Conner Chronicles is part of its own continuity

Terminator: Salvation could have worked well as a prequel movie however it is actually a sequel to Terminator 3

Terminator Dark Fate is supposed to be part of the T1 & T2 continuity family however like I said it contradicted not only with the original James Cameron movies core messages but contradicts Terminator 2: Judgement Day.

While T3 contradicts Skynet's destruction in the present day and delay it by a few years (somehow?) Despite all of Cyberdyne's main office where skynet was being made was destroyed. Somehow the Military makes Skynet instead? When the Skynet from the future is a cyberdyne invention.

Terminator Dark Fate does more retconning than T3. Sure Skynet is destroyed but yet somehow is able to send back terminators from a timeline that is supposed to been erased!

In Terminator 2 when the remains of the T-800 from T1 was recovered they made a huge plot point on why they (Sarah and John) must not only destroy the T-1000, the T1 T-800 chip and arm but their own T-800 buddy Uncle Bob in order to erase Skynet completely from their Timeline.

Then there is the small detail of T-800's learning systems. In Terminator 2, Uncle Bob was reprogrammed by twitching his data files from Read-Only to his learning systems hence why he became an ally.

In Dark Fate "Carl" was somehow able to reprogram himself? Which is stupid because if Skynet sent back multiple T-800's back into the past, "Carl's" very existence would ensure Skynet's survival, not its destruction for Skynet wannabe Legion's ascension, not becoming Sarah Conner's friend!

Then there is Dark Fate's retread on Sarah Conner training the Mexican chick to become the savior of humanity which is a ripoff John Conner's character arc!

Nice summaries. Yeah, there's a lot of oddness and contradictions. I just remember how awesome the future war looked and that sense of hope that humans would actually pull it off and win.

At the end of T2, my inherent pessimism about humanity instantly kicked in. With history being written by the individual and not the masses, and A.I seeming inevitable, it concerned me as to what we'd do if A.I does get stroppy with us at some point, but John is now a 60 year old 300lb coach potato.

So even though there was a bunch about Dark Fate that vexed me, it did at least end with the very same ending I liked about the original movie - a storm's coming in.

You've been studying the Terminator movies and you can't even write Judgment or Connor. Another idiot that doesn't know s#it about cinema and writes (badly) about it.

I'm an old school terminator fanboy not an English teacher! Also you could have corrected me nicely instead of insulting me.

@Carpen7er You might want to refrain from insulting other users. If you can't discuss topics politely, then don't mind being here.