NoobMember0 XPAug-07-2012 8:07 AMWhat is your favorite JP game? Mine is Operation Genesis, what's yours?
27 Responses to FAVORITE JURASSIC PARK GAME

AtmanAdmin21462 XPAug-21-2012 11:19 PMJust downloaded the demo for Operation Genesis and must say, very addicting. I just ordered a copy for PC, so I'll finally get a chance to play it next week. Haha Love classic RTS-style games like that.

NoobMember0 XPAug-23-2012 9:46 PMBefore anyone throws me too the wolves....Trespasser! Yes....Yes I know it's a horrible game. But with the fan patches, and mods, it's really fun. Even if it wasn't the first JP game I crushed. That would be the one for the Sega Genesis. The reason for Trespasser is. When it came out in 97, I was only 12. My cousin and I would take turns all summer long trying to defeat that game. So really I love the game more so because of the memories. And that's my answer.

AtmanAdmin21462 XPSep-06-2012 2:22 PMI suggest you download the demo of CNET, it gives you an idea of how the game plays. Mine JUST arrived yesterday, so once I finally get to playing it I'll be able to add my real thoughts of it here. :) But it does look like such a fun game! NoobMember0 XPOct-29-2012 6:00 PMJurassic Park:Lost World it was on the PlayStation 1. I loved that game. I liked that you could play as dinosaurs and omg...the Velociraptor :D

NoobMember0 XPNov-18-2012 11:39 PMOperation gen. was the bomb diggedy I loved moving a fence and letting the Rex out on guest or taking over the rover and causing van damage to the lil guys haha those kind of games bring out the joker in everybody lol. Chasing raptors around with the company touring vehicles oh why so serious haha.

NoobMember0 XPDec-07-2012 12:54 AMAny suggestions on how to get Operation Genesis? I'm looking on Amazon right now and all of the used ones are $90+ which is a ridiculous amount to pay.

NoobMember0 XPJan-27-2013 8:43 PMOperation Genesis! Great game and kept me entertained for hours. I especially loved the photography missions. Would love to see a sequel. If it's made I hope they keep the money cheap code. NoobMember0 XPMay-13-2013 1:02 PMi would have to say jurassic park operation genesis for the ps2 and pc versions. you can do anything you want with your park and when you get sight b you dont have to spend any money. andwhen you use the money cheat that game is even better. best pc game ever.
KING KAIJU 1 small step for kaiju 1 giant step for godzilla!!!! NoobMember0 XPSep-02-2013 2:34 PMJurassic Park for the Megadrive simple reason was the first console I had as a boy and one of the first games that made me go wow, and of-course you can play as a raptor and as grant that was very cool for a game of that time.

This is my program 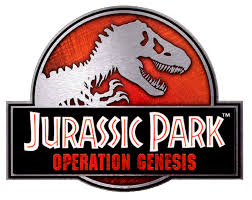 Because what other game allows you to got face-to-tooth with a bump-mapped Tyrannosaurus Rex in FPS form?