The Golden Land, 66 million years ago. Death had spread around the globe from a cruel twist of fate in the form of a six-mile wide doom from the heavens. It had even hit Dhahabi'ard, with vegetation wilting from the lack of sunlight. Herbivores like Alamosaurus and Triceratops were driven into extinction, leaving the carnivores without their main source of food.

The end was near, even for the world's greatest terrestrial apex predator - Tyrannosaurus rex. Once dominating the island continent of Laramidia, this mighty species was reduced to two families--one of which will meet their end here. The father, Tyrannos, was the largest theropod alive at the time. He was fifty feet long from nose to tail and towered eighteen feet above the ground. He was brown in color with some white markings across his jaws, neck, thighs, and tail.

His mate, Tyrannas, was also large, at a length of forty-five feet and a height of sixteen feet. She was one single color, which was gray. Both of them had orange accents on their head crests. The two had raised a son named Tyranax, who had grown up surprisingly quickly. He was forty feet long, twelve feet tall. His color scheme was black and gray with some red markings around the top of his skull. 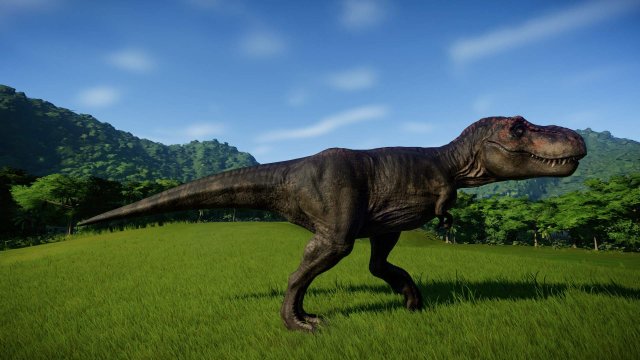 Sadly, the other two members of this pack, Sue and Tyrus, did not make it. Tyrus had starved to death and Sue was finished off by disease, and, out of desperation, their remains had been consumed by their packmates. The three lived on one of the area's mountains.

Elsewhere, near the stream of Corinae, the world's last Spinosaurus lived. This was Fang, who was light gray and black, with some yellow-orange accents on his sail. He was sixty feet long and seventeen feet tall.

There was a lone Carnotaurus named Destructo. He was a very dark orange with black spots around his body. He was thirty feet long and nine feet tall. Around his territory was the last surviving Utahraptor, named Slash. Out of desperation, his pack had cannibalized each-other, and he, the alpha-male, was the last survivor. However, things were tough without them. Most Dromaeosaurids were social animals, working together to take down large game. Slash was twenty feet long and six feet tall.

Tyrannos, Tyrannas, and Tyranax ventured out for food. Prey was once plentiful, with the family once feeding on Triceratops and Edmontosaurus. However, with them now extinct, feeding was a daily struggle. Their ribs showed through their skin because they hadn't had a decent meal in quite some time. Tyrannos, being the largest and requiring the largest amount of food, suffered the most.

The three Rex came across the two Carchars. The Carchars were better fed than the Rexes due to their smaller size. Despite their malnourishment, Tyrannos, Tyrannas, and Tyranax were all dangerous, and the Carchars fled. The Tyrannosaurs pursued them, with their son catching up to Sahara. He clamped onto her leg, allowing his father to finish her off with a fatal bite to the neck. They consumed the corpse as Mako got away.

Mako was also starving, and, with no food at the moment, he decided to quench his thirst at Corinae. Taking a drink, a pair of long jaws launched out of the water and grabbed him by his throat. It was Fang, who had slightly better luck by eating the fish in the river. However, they were small, and he wasn't going to miss this opportunity for a decent-sized meal. The Spino dragged the Carchar into the water, pinning Mako's head down with his foot. He thrashed around, his tail lashing and his legs frantically kicking. After a few minutes, all movement from his body ceased.

Slash spotted this from a far-away distance, and began to approach it before something bit down on his body. It was Destructo, who fed on his small meal. He was satisfied due to being smaller than megatheropods like Tyrannos and Fang.

The dinosaurs' rule over the Earth was coming to an end. Destructo, Fang, Tyrannos, Tyrannas, and Tyranax were the last survivors of millions of years of archosaurian evolution. All five of them were starving, malnourished, and barely clinging to life. Destructo searched in vain for something to eat, his head and tail hanging low from starvation. He continued walking through the Golden-Land before a set of five-foot jaws designed to crush bone clamped down upon his throat, ending the species Carnotaurus sastrei.

It was Tyrannas, who was severely weakened and starving. She savored her last meal, ripping into Destructo's flesh. She hopelessly scarfed down any piece of meat she could, but it wasn't enough. Tyrannas was doomed, far too weak to stand on her own too feet. She eventually collapsed, never to get up again. Tyranax mourned her death as he finished eating the remains of the Carnotaurus. Tyrannos and Tyrannas had sacrificed everything for their son in vain.

Tyrannos' breathing grew heavy as he laid down, his tail curved near his feet. He rested his head on the ground, helpless, hopeless, and unable to stand. Tyranax stepped over to his father, cooing and bellowing in anguish and sorrow. The small mammals watched father and son, the former of which finally found the strength to stand up one final time. He threw his head back and released his mightiest roar yet, echoing across the land. Then, he fell to the ground with no motion. Tyrannos, the Vengeful Rex, the Tyrant Knight - was dead.

Tyranax mourned the deaths of his parents but knew he had to continue on. His search brought him to the Stream of Corinae, where the starving Fang resided. Both roared at each-other as the last battle between Spinosaurus aegyptiacus and Tyrannosaurus rex began. Fang landed the first blow, slashing at Tyranax's face. This left a scar akin to that of his father as he bellowed back, biting down on the Spino's sail. Fang growled in pain before snapping his jaws shut around Tyranax's right arm, breaking it. The Rex bit his sail again, forcing Fang to release his grip.

The two circled each-other, heel-deep in the water. They bellowed simultaneously, their ribs visible. Fang clamped down on Tyranax's skull, but the latter easily slipped his head out of the Spino's jaws. The Spinosaur then lunged at his foe, slashing at his torso and thigh. Both were now seriously injured, gasping for air as they made their final moves. Tyranax went for Fang's neck, moving his head upward. Fang clawed at his head, neck, and shoulders, slashing in wild motions. Eventually, Fang's neck was crushed under Tyranax's iron grip. Dropping his opponent to the ground, the son of the Tyrant Knight roared in triumph, his bellow nearly matching that of his father in terms of sheer ferocity. He moved in to eat Fang--but collapsed.

The water turned red with his blood, and small mammals like Purgatorius gathered on the banks of the stream to watch the dying beast. Tyranax collapsed, laying down on his left side, partially submerged in the water. He gasped as he lost blood, which painted the river red. Finally, his head dropped, underwater. Tyranax was dead.

Despite their brutal deaths 66 million years ago, these beasts' legacies would carry on. Destructo's remains would make humans aware of the existence of Carnotaurus sastrei, while Fang, Tyrannos, and Tyrannas would be lost to history, buried deep beneath the Earth's surface - waiting to be dug up. Slash would become the type specimen for Utahraptor ostrommaysorum, while Tyranax would become the Tuft's Love Rex - large for an individual not fully grown. His remains would make humans aware that Tyrannosaurus rex was fully capable of becoming larger than Sue. However, Destructo, Fang, Tyrannas, and Tyrannos' DNA would be used by InGen to create more Tyrannosaurus on Isla Nublar.

3 Responses to The Vengeful Rex III

Pretty interesting one-shot. Surprised that you killed all of your characters though.

That was sad conclusion to your story. I did like the epilogue.