The Dinosaurs of Today and Tomorrow- Penguins

Yet another new series from em to you guys! I believe it is rather sad that people don't take too much time in thinking about the beatiful dinosaurs that are still around today!

I believe we can learn and better imagine about dinosaurs if we simply study these animals. To do so, I will look on a different class of birds each time.

And what better way to start with other than...

I hope you enjoy.

Mostly known for their cuteness and uniqueness compared to other birds, penguins truly are actually amazing animals!

The fact is, since all birds are dinosaurs, that makes the common penguin (all 18/19 species alive today!) a dinosaur!

Certainly penguins don’t have the look of a Velociraptor or that of a T. rex, let alone a “6-foot turkey,” but penguins actually have an amazing history that has been deeply explored through by todays scientists. 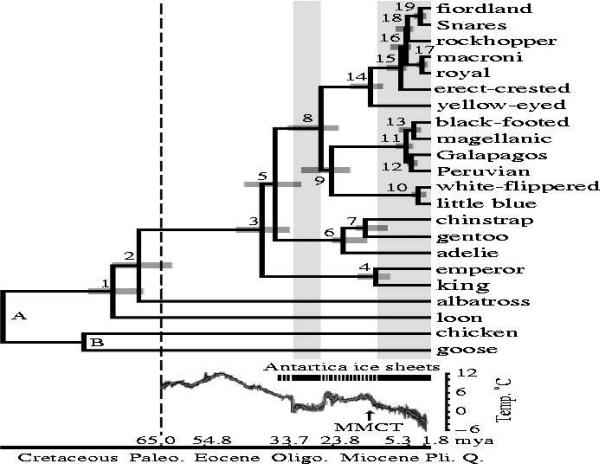 First, penguins have actually been around for over 60 million years!!!

It is suggested that the definite ancestor of penguins actually was alive before the end of the Creatceous Period!

It is believed that the penguin evolved from a common ancestor (an early bird that flew) and eventually over time, became what they are today. Penguins eventually became flightless, but it did take a while for that to happen.

Why did they become flightless? Well, their wings needed to adapt to be able to swim and propel through the water, most experts agree today. Over time the wing eventually formed the “flipper” and allowed to hunt in the water.

Some prehistoric penguins have been found, especially in New Zealand. (Above photo is a reconstruction of what the Kairuku penguin would have looked like. The fossil of the animal was discovered in New Zealand and dated back to approx. million years ago. More info of the animal will be down below.)

Scientists actually estimate that there are at least over 40 extinct species of penguin. While this may seem sad, it is understandable that some penguins couldn’t quickly adapt to the environmental changes or were probably excessively hunted by co-existing predators.

Not to mention there was a species of penguin called Palaeeudyptes klekowskii that would have been taller than most humans!

Penguin evolution is still being looked at today. Now let’s look into what’s is interesting about them.

-The Gentoo penguin can reach speeds up to 22 mph

-Contrary to popular belief, some penguins thrive in tropical climates such as the Galapagos penguins

-The Waimanu penguins lived about 60 million years ago, surviving for a very long time

-Many penguins will spend the rest of their life with the same mate, season after season

-Shortest penguin is the blue penguin

-In most species, the male penguin will build a nest and start shaking to attract a female, and when he attracts a female, he will raise his beak and honk, and if the female honks back, the penguin will then form a pair

-The Male Emperor penguin will starve himself when taking care of his egg, sometimes not literally eating anything for two months, to ensure no movement will harm or ruin the egg

So what will be the future of penguins? Will they all sadly die out if humans destroy their environment? Will natural selection choose to make them history? Will the evolve into something that we will never see?

The answer is unclear, though these creatures are endangered.

Thanks for reading! Please leave a reply, any comment is appreciated.

15 Responses to The Dinosaurs of Today and Tomorrow- Penguins

RAPTOR-401 - Aww, penguins! This was actually a very neat and interesting post! I very much liked the intellegent and fun manner in which you presented all of the information you included! Thank you for this extremely compelling and entertaining topic! :)

Thank you! I did try to make everything well-informed and fun to read, I hope i accomplished in doing so.

When you mentioned penguin evolution, I immediately thought of Hesperornis.

Did you know that only 2* out of 17 species of penguin live in Antarctica? The Emperor and Adelie.

*= The Macaroni penguin species has one nesting colony on the Antarctic Peninsula, but the rest of the species lives in the area surrounding it.

And yes, I did know that some penguins live in South Africa, the southern tip of South America, and New Zeland, plus the islands surrounding Antarctica.

Yeah, I knew only 2 lived in Antartica. I did read about how probably it is Penguins might of evolved from tha creature, though some things don't support it.

Article has also been updated, made a little mistake, penguin were around before the END of the Cretaceous period, not before the Creatceous period, there is after all, a big difference!

To be honest I never saw penguins as interesting creatures, but after this, I'm glad to have a new perspective on them.

And that was what I was trying to accomplish!

It was informative and fun to read. Makes me want to go learn more about other creatures I never took interest in. Which, I'll do right now.

That's excellent to hear! I hope you enjoy learning about other creatures like I do!

Thanks for enjoying the topic, and that video truly shows the awesomeness of penguins.