A Day in the Life of a Dinosaur- Parens the T. rex

Welcome to episode two of my new series, where I attempt to bring accurate but still imaginative views of dinosaurs in a time where the movies make us think rather false portrayals of them.

Today we have what some people refer to as the "King" of the dinosaurs, Tyrannosaurus rex. Thought to have been the land carnivore with the strongest bite force ever, this dinosaur has gained lots of attention in the media and in the public. 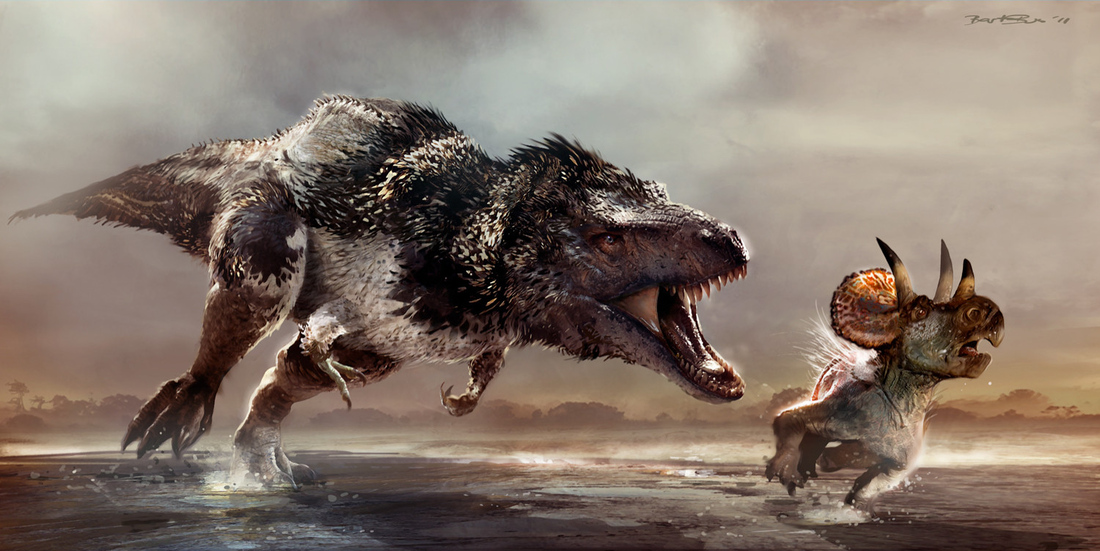 The name of this dinosaur is Parens, Latin for parent/father. He is an almost filly grown T. rex, very strong and having a very kind heart.

With the teeth and the size of this predator, we shall see how he goes about in his daily life as a father.

I have based his behavior off of common birds of prey. I also took a little more imagination with this, so please bear with me if some parts seem to be scientifically "inaccurate."

Please enjoy as we see the daily life of a King.

Pater woke up. He blinked a couple of times, as his eyes finally adjusted so he could see the sun shining clearly.

He gets up, stretching his body, his quills and feather raising all the way up. He shook his neck much like a hawk, and made a screeching sound. He looks around and checks on his somewhat newly hatched chicks. One egg still had not hatched for over 3 days.

He bent his head down near the egg.

He whimpered in grief.

It was no good.

He realized he now had to be even more cautious and wary of all the possible predators that will try to kill his other 5 chicks.

His female partner, Mater, walked in next to him.

He bent his head down and motioned towards the egg. When Mater sensed the egg was no good, she then whimpered in grief. It was clear. She was going to have to be extra cautious when guarding the babies, now that there was one less baby that was to survive into adulthood, let alone adolescence.

Parens then walked out the nest, ready to find prey for his babies. He went to the pond first to refresh himself. Later the week he would walk by the river with his infants, introducing them to the world outside their little nest, under extreme protection, of course.

Once he drank enough, Parens walked outside his territory, and periodically stopping and checking to make sure he did not invade other predators’ territories.

Once he walked far enough, he stopped and saw from a distance what looked to be a herd of herbivores. He adjusted his binocular eyes and saw it was a herd of Triceratops.

And he looked to the left focusing on a nearby bush, and in there was a juvenile Triceratops, far away from his mother and the dominant male.

Perfect. It was time to prepare the hunt.

The secret to the attack was simply surprise, planning, preparing defense, and the most crucial was to grab the prey, once he grabbed them with the teeth, all that was left was to sink in his banana-sized claws, and boom-

Even if the prey survived, all Parens had to do was just step on it, depending on the size.

Parens lowered his body, along with his quills. He walked around the juvenile Triceratops. Parens finally was about 10 metres away from the juvenile, hidden among the trees, with the Triceratops rear facing Parens. Parens then sprinted full-speed, his footsteps tumbling the landscape, running as fast as he could, much like a chicken.

Parens reached the prey and similar to that of an eagle, he pressed his foot and stepped on the Triceratops, tripping the juvenile over. And like a bird of prey Parens bent his head down, opened his mouth, and bit the juvenile, sinking his long teeth deep into the juvenile’s body, quickly as possible.

However, Parens had not checked his surroundings as well as he thought he did. He heard screaming right next to him from several other Triceratops juveniles. Far away with his adjusted eyes he saw the dominant male coming full speed at Parens.

Parens had to think quickly. Running would not do well anymore, the herd leader would surely try to kill off Parens now that he has been acknowledged as a threat that had to be eliminated since he was fully capable of killing more juveniles.

Parens could not lose this battle. He had a family and a female to support, he had survived a fierce battle between a bigger T. rex for this female. He had a pain in his leg, it still hurt a little today. But he won that. He had proven himself dominant over a bigger member of his own species.

Surely he could do it with another one.

The herd leader was getting closer.

Parens lowered his body, raised his quills, and bore his teeth, making himself look and feel like a king, ready to battle.

Parens prepared to do a slight sidestep, this might not work.

Parens had a closer and more focused look on the male. He was a young herd leader, with fresh scars on his frill that looked like he had been rammed in by an older Triceratops. This meant that this male was strong, strong enough to fight off the last leader.

But that meant this leader was still inexperienced.

He was capable of making mistakes when it came to defending his herd.

It was perfect. Parens felt more confident, still knowing he had to be careful.

Parens lunged a bit, the male now only 2 metres away. Parens quickly lunged to the side, the male passing him and sliding to stop, realizing his mistake. Parens had already leaped at the inexperience Triceratops and bent down, biting the creature with as much force as possible.

The herd leader fell in pain. Parens turned around and screeched at the other Triceratops, startled by their leader’s failure. They all ran off.

Parens then finished off the no longer dominant male. Parens then fed on the adult, eventually leaving it. Parens picked up the juvenile and continued to walk to his nest. When he arrived he dropped the juvenile, and the little chicks chirped excitedly, hopping towards the meat, and then beginning to tear little pieces.

Parens sat down, a bit worn down from anxiety and soreness. Parens motioned for Mater to go ahead and drink water. Mater walked off. Once she returned Parens walked off, he would now have to bring back some food for Mater, since the chicks were still too young to be left completely alone.

There was a bloody sight. Five dead baby chicks next to a crying one that looked like it had just found out his siblings had been attacked. The predator seemed to have been a scavenger and small time hunter.

There was no one guarding the nest. Parens realized that no male or female would leave this nest unguarded- unless the male had somehow been killed off and the female had to hunt instead, however, the female although a lot of times bigger was not as good as a predator.

Parens knew that out of bad luck the female had to have been killed, Tyrannosaurs were built to know and hear when their young are in any danger.

Parens felt a little grief, however he remembered how one egg was bad, and now he had one less child.

He now knew how to fix it. He opened his mouth and caught the chick in his mouth, being careful not to harm it even more. He quickly marched back to the nest. When he arrived he showed the chick, a young boy and dropped him next to Mater.

Mater screeched in excitement. After all her motherly senses were before diminished due to the failure of one of the rex eggs.

Parens then walked back to retrieve part of the meat from the dead male.

And that was important for the future of his species.

Please leave a reply! Feel free to criticize and/or compliment! And I apologize for all possible grammatical mistakes, I will correct any ones I notice ASAP.

7 Responses to A Day in the Life of a Dinosaur- Parens the T. rex

I love this one!!  Parens reminds me of Tytus a bit, but calmer, more calculating, and more bird-like than aggressive, instinctive/emotional, and JP-like (not to mention LOUD!).

What else you got Raptor?

Thanks Alphadino! I tried to capture the full possible majesticness of this creature. I also thought that such a creature like this ran more on instinct and emotion.

I hope these get better and better, next time it may be Spinosaurus or or an other predator!

You certainly got it on point Raptor.  I get that you didn't touch on sheer emotion like I did (which was my focus so long ago), because you wanted to focus on the animal himself and his activities on only that day, but your balance...nay...EQUILIBRIUM of everything that makes us want to like, fear, and admire dinosaurs was done perfectly WITH YOUR GOAL IN MIND!!!

This was awesome. Nice work 401, looking forward to more of these.

Thanks again AlphaDino, your comments so far are GREATLY appreciated! I was careful in writing each sentence, making sure to capture the beauty of the animal.

Yes, that is my goal, to have an accurate and imaginitive view of dinosaurs while making the reader admire them.

I hope I can keep on doing the same concept for the next ones.

Thanks Lord Vader, I hoped you would like it since this time we had a T. rex.

Nice job! I loved how you presented Tyrannosaurus as an intelligent, caring animal.

Thanks, that is what I was going for!